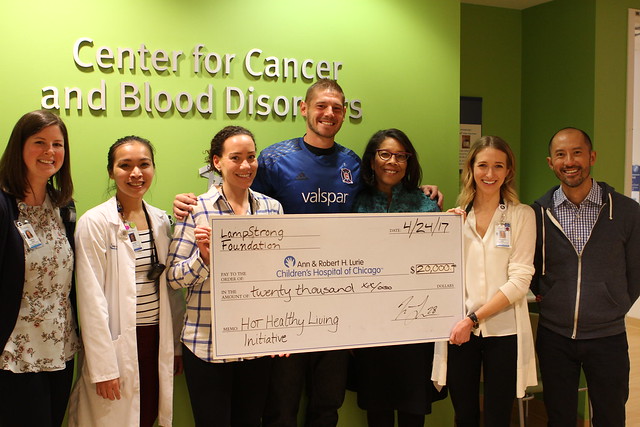 After an exciting Monday, 2017 marks the next step in an on-going battle to help end childhood cancer for one of the Chicago Fire's very own.

Goalkeeper Matt Lampson and his LampStrong Foundation kicked off a partnership with the Ann & Robert H. Lurie Children's Hospital of Chicago, which will help promote health, wellness, and physical fitness among children and teenagers in the midst of cancer treatments.

“When I came Chicago, I wanted to continue my foundation’s work,” Lampson said. “Lurie Children’s is definitely the best pediatric hospital in the city. Once I connected with them and said, ‘I would love for my foundation to partner with Lurie Children’s, specifically hematology/oncology/transplant.’ They said ‘Wow, this is great because everything you’re trying to do, we have a perfect fit.’”

Lampson -- whose community efforts earned him the MLS WORKS Humanitarian of the Year award in 2016 -- kicked off his partnership with Lurie Children’s with a patient visit on Monday during a first team off-day following their trip to Toronto over the weekend. During the visit, Lampson formally presented his donation to hospital officials, but was more importantly able to meet with kids undergoing various cancer treatments and lead them through activities.

“It’s very difficult to see people in the same situation that I was in, but to just offer them a little bit of hope and help them forget that they’re in the hospital for five minutes or however long and get them excited about something and see them smile, some of these kids don’t have a lot to be excited about. To help bring some sort of happiness into their day is very moving and humbling, so I was excited to do that as well.”

Lampson -- himself a Stage IV Hodgkin Lymphoma survivor as a youth -- has been active in the areas of childhood cancer awareness and prevention dating back to his days playing with Columbus Crew SC. However, he believes his newest partnership can help bring renewed vigor to an area of the treatment process that is particularly relevant to his own experience.

“We all have the same focuses of (teaching a) healthy lifestyle, physical fitness and nutrition during cancer treatment and after to stay as healthy as possible in a proactive manner, which is something that I didn’t necessarily have when I was going through treatment,” he said. “It’s a very exciting time. LampStrong just donated $20,000 to Lurie Children’s yesterday, so that will go towards helping in those areas in a few programs in particular. It’ll be good.”

Lampson’s motivations are simple. In drawing from his own battle with cancer and the effects it had on his mental and physical well-being, the 27-year-old saw an opportunity to offer children and teenagers undergoing similar experiences a proactive way to shield them from what can be a difficult post-treatment return to health.

“When you start to be reactionary and retroactive, the hill that you have to climb is significantly steeper,” he said. “I remember when I was done with treatment I was 70 pounds overweight. I had zero lung function. I had significant muscle atrophy. I didn’t have the programs that we’re about to make available. I know that there are going to be people that flock to this and embrace it and it’s going to be very helpful for them, but whether everyone does or not, it’s going to be available for them. That’s really important. It will be a resource for them to not have to climb up a hill as steep as mine.”

Some of Lampson’s planned program offerings will include bi-monthly in-hospital visits from himself and some of his teammates, recording health and wellness segments for the hospital’s in-house television programming, a monthly “Fitness Friday” that will emphasize one area of physical fitness in particular, as well as the purchase of fitness equipment for patients to properly learn to use during and after their treatment.

“I wanted programs with the most consistency,” he said. “I didn’t want to do things that were once every three months or once every year. I wanted stuff that was available daily.”

Now, as Lampson’s new programs begin to take off, his commitment to the cause remains as steady as ever.

“It’s about engaging teenage patients to get them involved and help them realize that they’re not alone,” he said. “That’s a very vulnerable timeframe to be going through cancer treatment. We’ll be having a lot of events for teenage patients and resources for them to know that they’re not alone and there’s definitely more to life after cancer. Those are the emphases, and I’m excited to start them up.”